Energy drinks have been popular for decades in Asia, and have seen a more recent surge in popularity in Europe and North America over the last twenty years or so. Their popularity, especially among children and teens, has caused alarm among some health professionals due to their very high levels of sugar and caffeine. So, are energy drinks dangerous? What’s in them? How do they affect your body? Read on to find out.

What are energy drinks?

Energy drinks are soft drink that promise to make the drinker feel more energetic & alert. This is done primarily by filling the drinks with large amounts of sugar and a considerable dose of caffeine (generally speaking about the same strength as a cup of coffee). They also tend to contain other ingredients such as added B-vitamins and taurine.

There are hundreds of energy drink brands on the market – some of the more well-known ones include Red Bull, Monster, Rockstar, Relentless and Mountain Dew (among many, many others). Despite the large variety of names & brands however, the basic ingredients are pretty consistent.

How does caffeine work?

Caffeine is a stimulant that creates the sensation of feeling more awake. It does this by blocking the effects of adenosine – a brain chemical involved in sleep. When this happens neurons backfire and put the brain into a state of panic, initiating the ‘fight-or-flight instinct’ and releasing adrenaline. Caffeine can also increase dopamine levels – the chemical associated with the feeling of pleasure. These two chemicals combine to make you feel like you have bags of energy.

Like many things, caffeine is fairly safe when used in moderation. Over-use can cause undesirable side-effects including irritability, heart-palpitations, dehydration, anxiety and insomnia. It can also be addictive. High-caffeine products are not recommended for children or pregnant or breastfeeding women.

Ephedrine – A stimulant that affects the central nervous system, also found in weight-loss products and decongestants. It’s a somewhat controversial substance, as it has been linked to heart problems.

Taurine – An amino acid that’s naturally produced by the body and used to help regulate your heart beat. The jury is out on whether drinking it has any real benefits.

Ginseng – A plant extract that is believed to have medicinal value, including boosting energy and reducing stress.

B-vitamins – A group of vitamins used by the body to convert sugar into energy.

Guarana seed – A plant extract native to parts of South America that acts as a stimulant.

Carnitine – An amino acid that plays a role in the metabolism of fatty acids.

Inositol – Technically not a vitamin, but a member of the vitamin B complex, Inositol helps relay messages between cells in the body.

Ginkgo biloba – Another plant extract, believed by some to improve memory and concentration.

The chart below showcases a number of popular energy drink brands – including Red Bull, Monster, Mountain Dew, Rockstar and more – and compares the levels of sugar and caffeine in a standard size can or bottle. A 500ml can of Rockstar Xdurance is the worst offender, with 17 teaspoons (about 68g) of sugar and the caffeine equivalent of 2 americano coffees, closely followed by a 500ml Mountain Dew, which contains the same amount of sugar but less caffeine. The RDA of sugar for an average adult is around 30g.

For reference, 1 teaspoon = 4g of sugar.

Click on the image to view the full-size version. 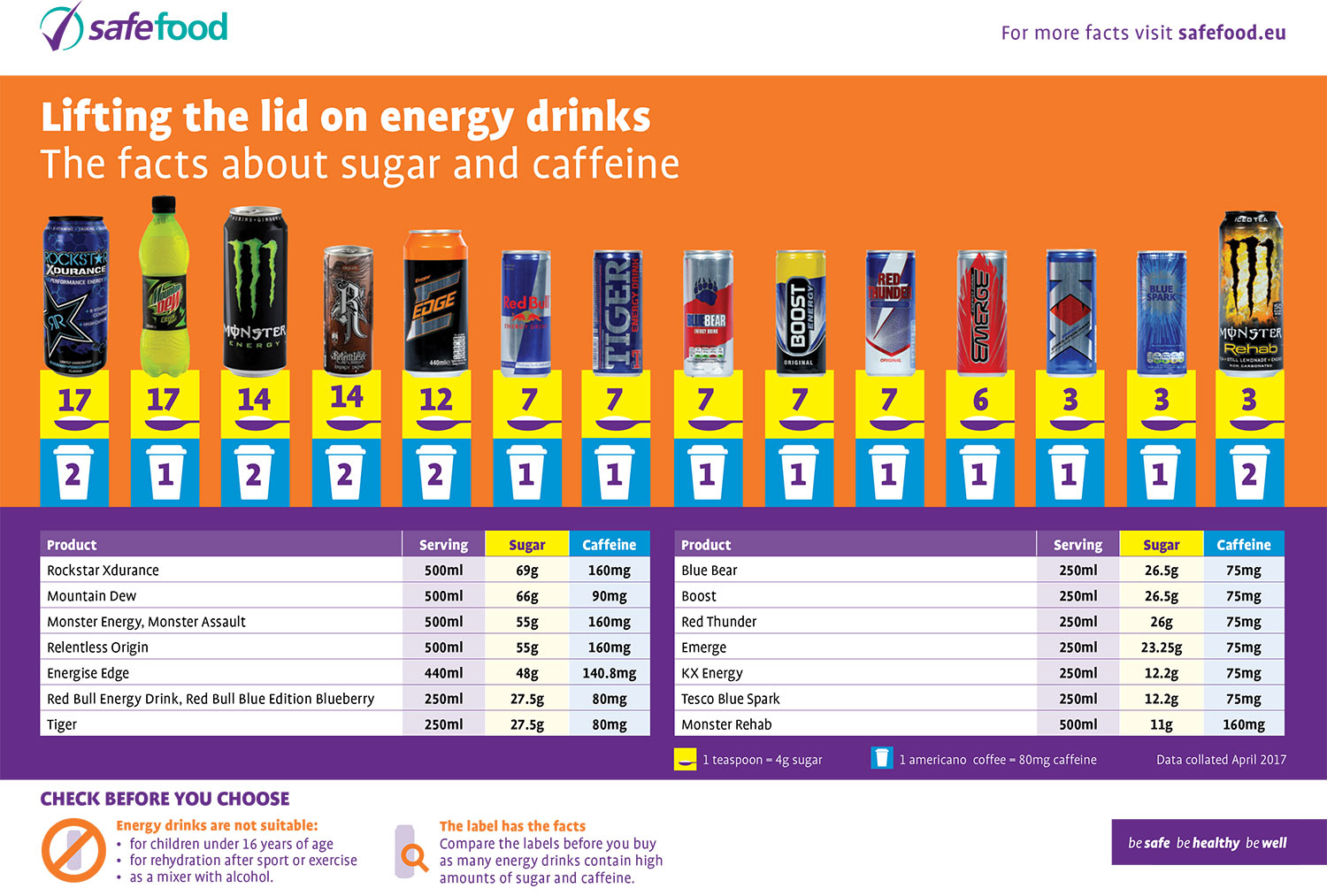